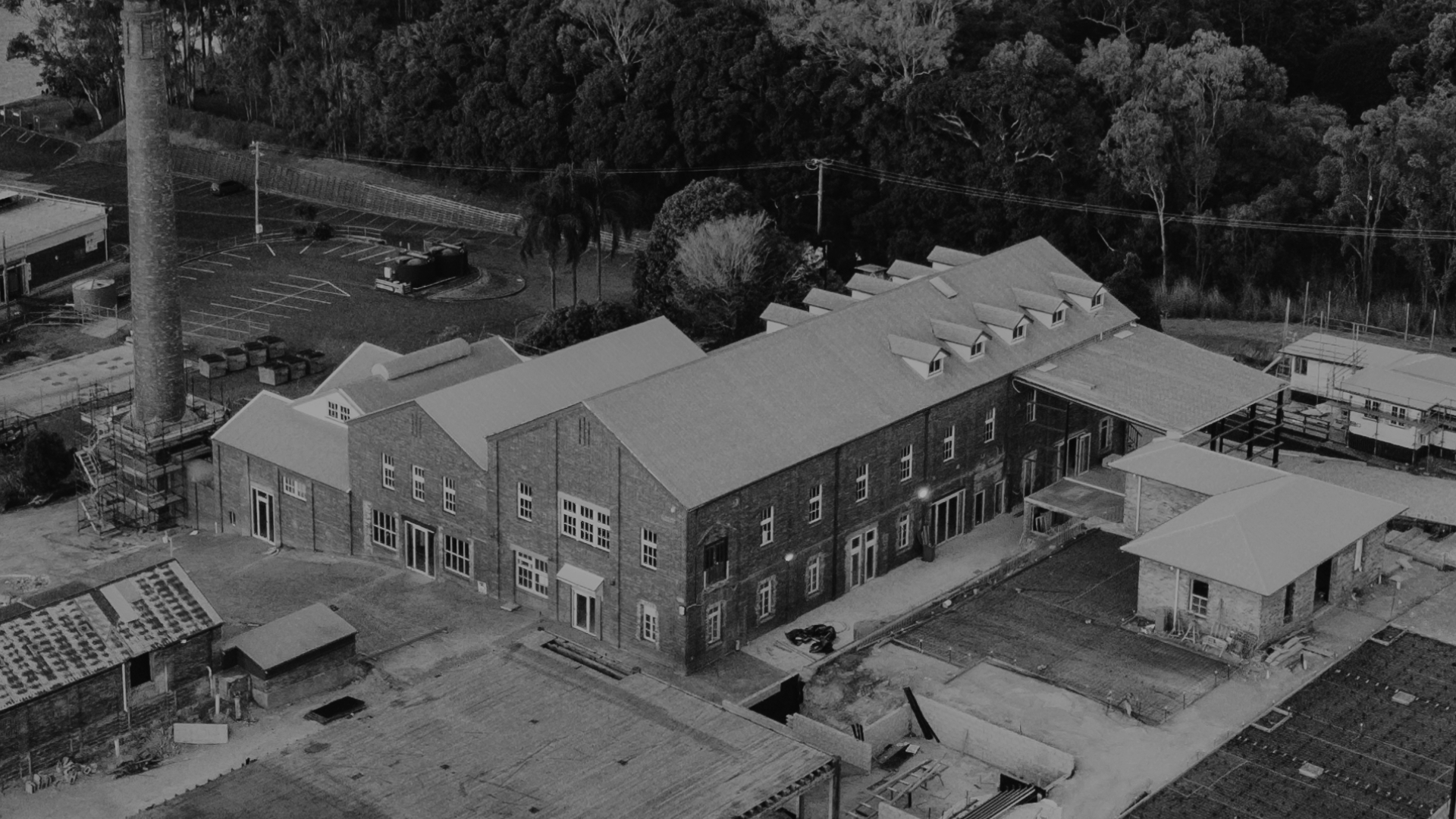 1917
Factory at Colmslie is Built

During World War I, the Australian Commonwealth Arsenal developed its own defence factories, due to disruption of the supply of manufactured goods and armaments to Australia. The Acetate of Lime Factory at Colmslie, Brisbane was built to provide acetate of lime for cordite production at Maribyrnong and cost around £120,000. It consisted of a number of brick and timber buildings built between 1917 and 1920.

Belgium born Auguste de Bavay, a regarded bacteriologist and chemist, had worked for a number of breweries (including Fosters, Swan, Cascade, Carlton and United). He was known for designing the revolutionary ore-extraction technique of the “skin” or “film” flotation process, patented in 1905, to deal with the “Sulphide Problem”.

In 1914 de Bavay was asked by the Minister of Defence to investigate the possibility of manufacturing acetone for use in producing cordite, and within just two weeks he had developed a process based on the fermentation and distillation of molasses. It was then he was asked to build the Colmslie factory, which had a well-equipped chemical and bacteriological laboratory. His son, Francis Xavier de Bavay, worked alongside him and eventually became the first manager of the factory. De Bevay worked for the love of his job and made no money from his invention; he had claimed that it was his gift to the Commonwealth. 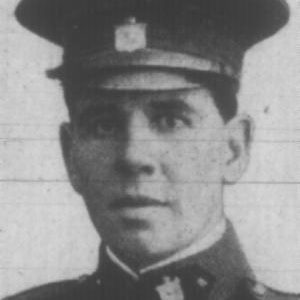 Production began in 1918, with 30 employees, and continued after the war ended, in order to lay up reserve supplies. When production of acetate of lime (calcium acetate) ceased early in 1922, about 1,000 metric tons had been made; enough to produce about 400 million rounds of .303-inch (7.7 mm) rifle cartridges.

ACETATE OF LIME PROCESS
The process of making acetate of lime started with molasses (from the Babinda and Mulgrave sugar mills) that had been shipped from Cairns to Brisbane. The molasses was pumped into a holding tank near the river and was diluted with water. The liquid was then heated and cooled in the three-storey Agitator and Cooler House, to destroy foreign bacteria. In the two-storey Fermenting House yeast was added to large wooden temperature-controlled vats, with fermentation producing a dilute (8%) solution of alcohol (ethanol). The “wash” was transferred to vats on the top floor of the three-storey Settling House, where it was allowed to settle out. The wash was then transferred to the adjacent three-storey Acidifier House, where it was repeatedly pumped through wooden vats, which contained wood shavings and Bacterium Aceti. Over several days, the alcohol was converted into acetic acid (vinegar). The new wash was heated by steam coils, and the acetic acid and water was distilled off, in the two-storey Evaporator House. The acid distillate was neutralised with milk of lime to produce acetate of lime, and this solution was concentrated for evaporation on a heated revolving drum, where it was scraped off as solid flakes. The bagged product was then sent to Maribyrnong for conversion into acetone. Acetone enabled the combination of nitroglycerine and trinitrocellulose to form cordite.

Due to shortages of certain grades of concentrated alcohol, the dilute alcohol produced by the fermentation of molasses was distilled to produce concentrated alcohol in the Alcohol Still House, a two-storey eastern extension to the Evaporator House.

Approximately 800 kilolitres of this alcohol was produced, and mixed with benzol and ether to produce 1200 kilolitres of motor fuel. This fuel was used by the Post Master General’s Department for its postal vehicles travelling from state to state and by RAAF vehicles in Victoria.

In 1926, the factory was officially closed down to a reserve status.

The idea was floated that the Post Master General’s Department could use a building for its frequency measuring equipment, using the chimney and water tower to mount aerials. The Department’s Radio Broadcasting Branch, Wireless Experimental Section, occupied
various buildings from 1937, including the Acidifier House and the Fitter’s shop.

The Royal Australian Navy (RAN) gradually took over most of the complex, which became part of the Fairmile Naval Base (by 1948 the base was referred to as ‘HMAS Moreton, Colmslie’). The factory’s jetty became a refuelling wharf, and navy workshops and a repair slipway
were built between the factory and the river. 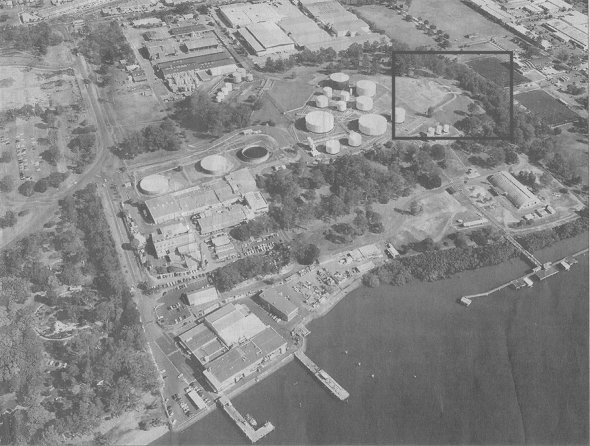 Two timber demountable blocks were added in c.1949, for the purpose of housing the influx of migrants.

In December 1948 the Department of Labour and National Service had asked the RAN for the use of the factory buildings for Baltic Displaced Persons. However, the land near the river
would be used by the Army. In June 1949 it was reported that there would be a Worker’s Hostel at Colmslie with a projected capacity of 500 persons. The existing buildings of the Acetate of Lime Factory would provide accommodation, but a number of timber huts were also added by
the Commonwealth Department of Works and Housing. Two of these huts, which were used as six-room sleeping blocks, remain on-site today, to the north of the brick Engineer’s Office and Fitter’s shop. By December 1949 the term ‘Colmslie Migrant Hostel’ was being used in correspondence. 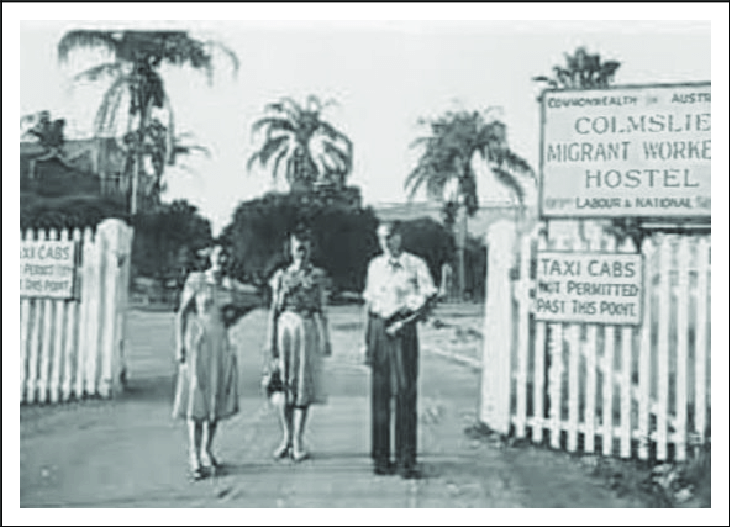 1952 ‘Commonwealth Hostels Limited’ took over management of the Colmslie Migrant Hostel. Although it was a policy that assisted British migrants should live at hostels, there were also non-British migrants at Colmslie in the late 1950s, including Germans, Finns, Danes, Yugoslavs, and Russians. The migrant accommodation was officially in 1965.

The waterfront area, with the workshops, slipway, and part of the hostel grounds, was transferred to the Queensland Fish Board. The two-storied Fermentation House of the Acetate of Lime Factory still stands on this land, which now contains the Brisbane Fish Markets.